Dr Rath’s discoveries and our research set up new therapeutic directions and present a real chance to control cancer, all of which had not been possible with conventional medicine approaches. We have demonstrated that a specific combination of natural substances (vitamins, amino acids, polyphenols and other micronutrients) working in biological synergy can successfully control critical aspects of malignancy in our body, such as:

Based on Dr Rath’s discovery, our research focuses on a common pathological mechanism in all types of cancers which is the degradation of collagen and other components of connective tissue. Enzymatic destruction of this tissue which surrounds and binds all cells in our body together is essential for cancer cells to migrate in the tissue and spread to other organs in the body. The activity of connective tissue digestive enzymes correlates with cancer aggressiveness.

Cancer is one of the most dreaded diseases affecting mankind. It is the second leading cause of death in the industrialized countries and a significant health burden in other countries in the world. Decades of scientific and clinical research conducted at leading institutions worldwide have achieved marginal progress in managing this disease and a cure for it is not even in sight. ...hide content

Cancer is characterized by a continuous proliferation of undifferentiated cells that tend to invade surrounding tissue and metastasize to new body sites. Over one hundred types of cancer have been classified. The tissue of origin gives the cancer distinguishing characteristics, and approximately 85% of cancers occur in cells of epithelial origin and are classified as carcinomas. Cancers derived from mesodermal cells, such as bone and muscle cells, are called sarcomas and cancers of glandular tissues, e.g., breast tissue, are called adenocarcinomas.

In many cases cancer develops as a result of exposure to radiation, viruses, and various chemical toxins, including certain medical drugs. About 50-75% of cancers have been recognized as preventable since they are triggered by factors that can be avoided, such as  improper diets, micronutrient deficiencies or environmental pollutants.

Although there is a great diversity of these causative agents, the end cellular response is always the same - the production of cells with the following characteristic which applies to most, if not all, cancers.

3. Immortality of cancer cells: Due to an error in the genetic program which determines the time of cell death (apoptosis) cancer cells do not die like all normal cells in the body which have a limited life span

5. Invasion in the tissue and metastasis to other organs: Cancer expansion is possible because malignancy triggers uncontrolled digestion of collagen and connective tissue paving the way for cancer cells to invade and spread. 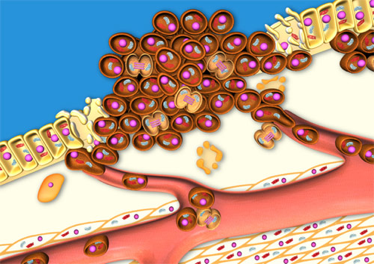 The majority of current therapies are not cancer-specific and do not curtail the spread of cancer to different organs. They are based on the use of highly toxic chemical agents (chemotherapy) and radiation (radiotherapy). Both treatments generate serious side effects, organ damage and secondary cancers. As a result, these treatments have not been successful in controlling cancer and on the contrary, many cancers are increasing.

Comprehensive review of the effectiveness of chemotherapy in 22 types of cancer has shown that these highly toxic treatments increase a chance for five-year survival by merely 2.1% and in many types of cancer, chemotherapy does not offer any benefits (Clinical Oncology 2004).

The basis of chemotherapy and radiation is the destruction of rapidly dividing cells, such as cancer cells. However, these treatments do not discriminate between healthy and abnormal (cancer) cells. As a result they also damage cells in healthy organs  that have a high renewal rate  and are frequently dividing, such as the cells of bone marrow, skin, the intestinal lining and many other organs. Therefore a frequent consequence of these therapies is anemia and weakening of the immune system further impairing the elimination of cancer cells. Intestinal bleeding triggered by these therapies impairs the absorption of nutrients  and contributes to diminishing  the body’s natural ability to fight cancer. The consequence of the administration of such powerful chemical toxins or radiation is damage to the genetic machinery of the cells, the DNA, leading to development of new cancers. These interventions also activate the secretion of enzymes that facilitate the release of cancer cells from the surrounding connective tissue accelerating the spread of cancer to other organs. Chemotherapy often fails since many cancer cells develop resistance to these toxic agents.

In this situation approximately 80% of patients diagnosed with cancer seek alternative therapies, which include antioxidants and other essential nutrients. ...hide content

Despite the fact that 90% of deaths from cancer  result  from metastasis, pharmaceutical research has largely ignored this fact.  As reported by the New York Times in 2007 there are less than 100 research groups worldwide which are researching metastasis.

The reason for this can be found by understanding the principles of the pharmaceutical business, which builds its profits from the existence of diseases as a market for their patented drugs. As such, pharmaceutical research works towards developing novel, synthetic components which can be protected by patents. In many cases natural compounds have been chemically modified in order to make them eligible for patent protection (ie. tamoxifen) . Additionally, since these substances are toxic do the body cells and generate  various side effects they create the needs for new drugs to deal with these health problems. This further expands drug business markets resulting with  the lack of incentives for changing the system. World wide pharmaceutical drug market is $550 billion business.

In contrast, the focus and direction of research at the Dr Rath Research Institute has been on finding effective health solutions using natural, non-patentable, safe and effective approaches in combating cancer. ...hide content

In 1990 Dr. Rath presented a new research approach that can lead to effective control of the growth and spread of cancer. This research focus is on strengthening the integrity of a natural barrier made of collagen and other connective tissue elements which surround all cells, including cancer cells. In order to grow and spread to other organs every type of cancer cells have to disintegrate (digest) this natural collagen and connective tissue barrier with the help of specific enzymes. To halt this collagen digestion process, Dr Rath proposed the use of natural components, vitamin C and the amino acid lysine. 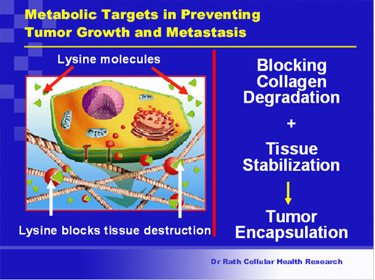 The main reason cancer is so difficult to control is that it adapts to the body’s natural mechanisms to expand in the tissue and relocate to other organs.

Most cells in the body are capable of producing enzymes that dissolve the surrounding collagen and connective tissue (collagenases, proteinases). In a healthy  body this ability is essential for maintaining normal body function, tissue repair and restructuring. For instance, enzymatic degradation of connective tissue forms an integral part of immune system effectiveness (i.e., allows for migration of white blood cells to infection sites), the function of reproductive organs (release of an egg in the female monthly cycle, remodeling of breast and uterine tissue occurring in pregnancy and lactation) and during growth. This collagen dissolving mechanism is well controlled in a health body.

However, the same mechanism shifts out of control in a disease condition, such as cancer. In this case a persistent secretion of collagen destroying enzymes by cancer cells leads to tissue degradation facilitating tumor growth and metastasis. In addition, uncontrolled collagen dissolving accompanies other pathologies, such as chronic inflammation (arthritis, asthma, atherosclerosis), infections (destruction of connective tissue  facilitates spread of microbial agents) and in many other conditions. (For more information, please click here.)

In the case of cancer, the importance of controlling connective tissue destruction mechanism has been confirmed by Danish researchers using a transgenic mouse model. Their study has shown that genetically modified mice which are unable to produce the enzyme urokinase which is needed to degrade collagen, have a limited ability to form cancer metastasis. (K. Almholt et al., Reduced metastasis of transgenic mammary cancer in urokinase deficient mice, Int J Cancer 2005; 113(4): 525-532)

There are many enzymes involved in digesting connective tissue proteins, such as plasmin, urokinase and various types of matrix metalloproteinases (MMPs). The main enzymes associated with malignancy are MMP 2 and MMP 9. Their activity has been linked to the aggressiveness of cancer. Interestingly, tissues which have natural remodeling potential and therefore can produce large quantities of these collagen digesting enzymes (i.e., tissues in the breasts, ovaries, and bone marrow) have a high susceptibility to develop cancer. Dr Rath has provided an explanation to this phenomenon. ...hide content

Although various natural substances such as vitamin C, green tea polyphenols and others have shown anti-cancer activity, their effectiveness has been limited to selected cellular mechanisms. In addition, they have to be used in very high doses which are possible only through intravenous delivery.

We have developed a specific synergistic combination of nutrients that can inhibit invasion of cancer cells in the tissue and control other key mechanisms of cancer at the same time. This synergy utilizes vitamin C, the amino acids lysine, proline, arginine, N acetylcysteine, green tea extract (NM) as well as copper, manganese and selenium.

Using both in vitro and in vivo approaches, we provided comprehensive scientific data that this nutrient synergy can:

• Decreased cell multiplication resulting in the inhibition of tumor growth.

As a result we demonstrated in vivo that the spread (metastasis) of cancer cells can be largely inhibited by the administration of nutrient synergy in the diet or by iv and ip delivery. 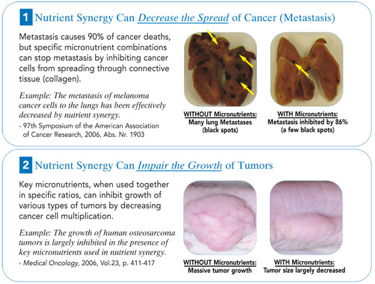 • Impaired secretion of various pro-inflammatory factors, which have been implicated in the induction and progression of cancer 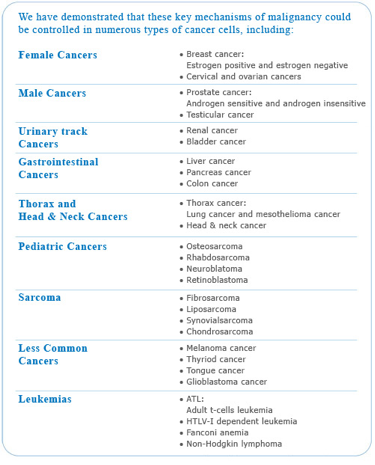 1. Inhibition of breast tumors. Significant reduction in the appearance (78% decreased tumor weight) and growth (68% decrease) of mammary tumors induced by N-methyl N-nitrosourea tumors in female rats. In addition, all tumors developed in a group of rats taking micronutrient supplementation were benign (adenomas), while in a control groups all were adenocarcinomas. (For more information, please click here.)

2. Inhibition of skin tumor (papilloma) by DMBA (7,12-dimethylbezanthracene) in female mice. In the presence of nutrient synergy in a diet the number of papillomas decreased by 85%. (For more information, please click here.)

3.Inhibition of lung cancer by urethane in mice. In the presence of nutrient synergy in a diet the number of lung tumors decreased by 50%. (For more information, please click here.) ...hide content

Nutrient synergy has shown to be more effective than green tea extract when administered in a diet in animals who have already developed breast tumors. In addition, in the presence of nutrient synergy there was a significant decrease in the number of malignant versus benign tumors. (in preparation for publication)

Nutrient Synergy - safety. Contrary to chemotherapy toxins, radiation and various pharmaceutical drugs, nutrients are safe even in higher doses. Moreover, they are needed by all cells in the body, immune system cells, thereby supporting the entire body’s ability to fight cancer.

Anti-cancer activity of this nutrient synergy has been confirmed in a number of studies both in vivo and in vitro published in numerous scientific publications. Please select a title below to read the respective research study. ...hide content