Lipoprotein (a), compared to LDL and HDL is a lesser known lipoprotein, yet it is one of the strongest genetic risk factors for cardiovascular disease (CVD), including myocardial infarctions, stroke and other forms of CVD1,2.

Lp(a) is a cholesterol carrier composed of an LDL molecule with its structural protein - ApoB-100 - bound to the additional high molecular weight glycoprotein called apolipoprotein-a (Apo-a). These two proteins are linked via disulfide bonds3. See the graph 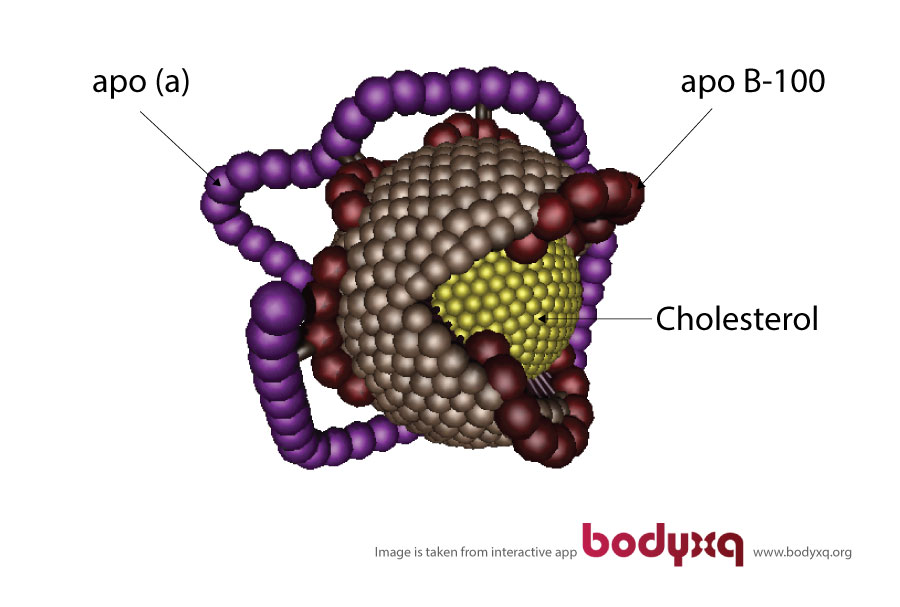 Lp(a) has unique properties. Lp(a), due to the presence of an additional large protein (apo-a), has high binding affinity to various components of the extracellular cellular matrix (ECM), including fibronectin, laminin, and others5 . Based on its homology with plasminogen7, apo(a) also binds avidly to fibrinogen and fibrin, displaying strong antifibrinolytic properties and it is being considered the “missing link” between atherogenesis and thrombogenesis8.

While many characteristics of this molecule have been elucidated since its discovery9 half a century ago, the physiological significance of Lp(a) has been poorly understood10.

Lipoprotein(a) is primarily found in humans and sub-human primates. The emergence of the apo(a) gene was dated to about 40 million years ago, about the time of the divergence of the Old World and New World monkeys7. This date coincides with the loss of endogenous vitamin C (ascorbate) synthesis, through a mutation of the gene for gulonolactone-oxidase (Gulo) in the ancestor of man11. This fact led to the hypothesis presented by Dr. Rath and Dr. Pauling in 1990 connecting these two evolutionary events12. This concept explains many aspects of cardiovascular disease and at the same time challenges the highly promoted idea that elevated cholesterol blood levels are the main cause for atherosclerosis, heart attacks and strokes.


It is widely known that loss of the ability to produce vitamin C endogenously rendered our ancestors susceptible to scurvy- the disease which develops after a few months of complete vitamin C depletion in the diet and is characterized by disruption in collagen synthesis and a loss of connective tissue integrity. The morphological changes occurring in the vascular wall during hypoascorbemia (suboptimal vitamin C intake) and scurvy are characterized by the breakdown of the ECM and a loss of the endothelial barrier function. This leads to the formation of large endothelial gaps which allow the influx of macromolecules into the vascular wall that are normally excluded by an intact endothelial barrier. With continued lack of vitamin C supply a gradual deterioration of the vascular wall structure leads to hemorrhagic blood loss, which is the most frequent cause of death in people with scurvy.

According to this new understanding presented by Dr. Rath, the presence of the apo(a) macromolecule with its primary structure larger than collagen, with antifibrinolytic properties and with high binding affinity to extracellular matrix components, could have functioned as a repair molecule compensating for the structural ECM impairment caused by suboptimal vitamin C intake and scurvy. Therefore, loss of endogenous vitamin C production coinciding with emergence of Lp(a) synthesis in humans can illustrate the event contributing to the survival of our ancestors at the times of severe nutrient deficiencies during the Ice Ages. ...hide content

Our work: In our earlier publications we demonstrated how vitamin deficiency can trigger the development of atherosclerosis independent of dietary cholesterol and presented natural means to control this process HEART DISEASE. Recently we developed a unique transgenic mouse model that allows for increasing our understanding of human atherosclerosis on a much larger scale.

Our newly developed mouse (Gulo-/-;Lp(a)+) mimics human metabolism in its two distinct genetic features: the lack of endogenous vitamin C synthesis (Gulo-/-) and the expression of human Lp(a). This mouse model allowed us to test whether the loss of vascular integrity due to prolonged vitamin C depletion and its suboptimal intake can result in an increased deposition of Lp(a) molecules inside the vascular wall and consequently, atherosclerosis. Moreover, we could test whether dietary supplementation with high levels of vitamin C can prevent this pathological process. The results of this important study, which challenge current cholesterol-based approaches to atherosclerosis, have been submitted for a publication.

Other work: Independently, the connection between loss of vitamin C production, structural damage in the vascular wall and elevated blood cholesterol levels that was discovered by Dr. Rath about 20 years ago has been gaining increased scientific support. Among others it was confirmed by the work of Maeda et al. , using genetically modified mice which, similar to humans, have lost the ability of endogenous production of vitamin C. The early hallmark of vitamin C deficiency displayed in these mice was the disruptions of the vascular structure and elevated blood cholesterol levels. This model, however does not allow to investigate the role of the other critical factor in human atherosclerosis, which is the Lp(a). ...hide content