Arthritis and arthrosis are very common connective tissue diseases. In arthritis, the problem is an inflammation of the bones, joints, and tendons. Chronic arthritis can lead to arthrosis, a degradation of cartilage in the joints. The cartilage can lose its elasticity, become rough and lose mass. This can result in the deformation of the cartilage. Both arthritis and arthrosis are very painful diseases, with all the typical symptoms of inflammation, including fever, reddening, and swelling. Joints may also become stiff. 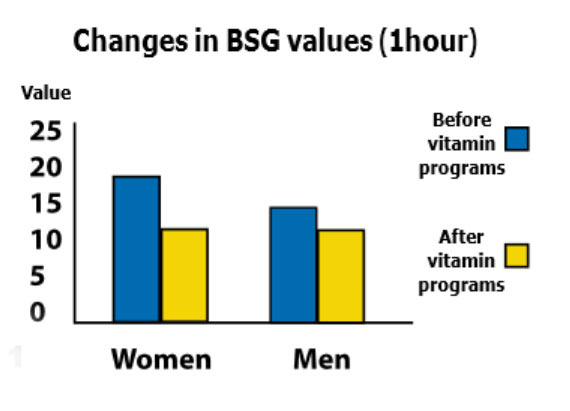 The pilot study involved 10 patients between the ages of 45-84 years old, diagnosed with arthritis and/or arthrosis. These patients took specific vitamins daily during the six months of the study. No other medications were used. Patients in the study also underwent physical therapy treatments. As a control parameter, blood tests were performed every six weeks for various parameters that are indicators of inflammation.

The symptoms of inflammation were diagnosed in patients’ blood by analysis of erythrocyte (red blood cells) sedimentation (BSG), presence of a specific class of proteins called C-reactive proteins (CRP), and measurements of the number of leukocytes (white blood cells). In addition, x-ray pictures of the diseased areas were taken at the beginning and at the end of the study period. ...hide content

After six months of the study, the following changes in inflammation parameters in the blood were detected:

1. Blood sedimentation values (BSG) decreased in women by 35% and in men by 27%, compared to the initial values at the beginning of the study. (Figure 1)

2. Blood leukocyte levels were not affected and stayed at normal ranges for women and men at both the beginning and at the end of the study.

3. Levels of CRP at the beginning of the study were two to four times higher than normal levels in six of the 10 study participants. By the end of the study, CRP levels had dropped by an average of 30%. Both the lowering in sedimentation of the blood and the falling of CRP levels demonstrated an improvement in the incidence of inflammation among arthritic and arthrotic patients. (Figure 2)

4. X-ray examinations of diseased areas indicated an improvement in 50% patients.

This six-month pilot study, though conducted with a small group of patients, confirmed the positive effects of this vitamin program. The further effectiveness of the synergistic action of nutrients in arthritis has been confirmed by several testimonials that are based on patient medical records. ...hide content